Norse Mythology is one of the more famous and popular of all the mythologies of the world. This is partially due to the fact of Norse mythology and various forms Norse paganism still being a belief system primarily for many people across Europe, and also in North America. This is also because the world of Marvel and mainstream media has really put Norse Mythology on the map with pop culture, movies and comics. But like with most movies, ideas are taken and movies or television shows are not usually good examples of historical accuracy.

The ancient Norse world was one full of warriors, travelers, story tellers, farmers and artists. Many know that "Vikings" were a part of the Old Norse world. They had a great belief in destiny and fate; so much so that the Norns are a major part of Norse mythology. The Norns can be compared to the fates in Greek Mythology. They were three fates who sat at the bottom of Yggdrasil, the World Tree or Tree of Life. 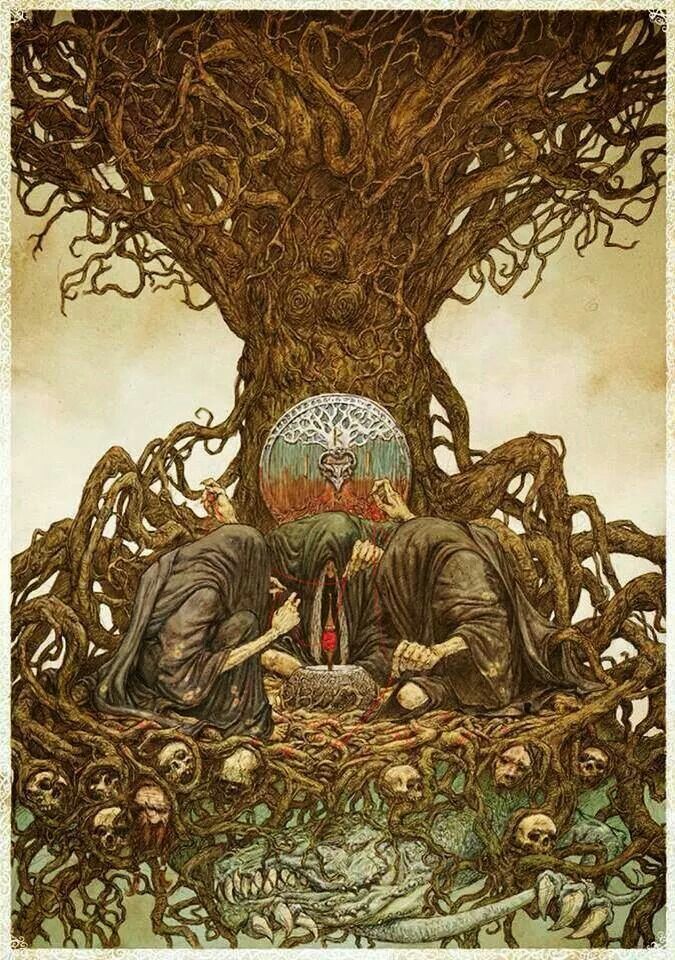 Some of the other most well known parts of Norse Mythology include Ragnarok, which according to the lore will be the end of existence.. well - Almost! Some believe that Ragnarok has already happened, some think that it didn't happen - but what I and many others find relevant is that Ragnarok is a cycle.Think about it. Valhalla (Old Norse Valhöll) is another term you may hear frequently; that is a majestic hall of (SOME - not all) slayed warriors that is ruled by Odin.

Most of what we know about Norse Mythology comes from the Eddas, the Prose Edda and Poetic Edda. The Poetic Edda, which is the elder of the two Eddas is probably the most important surviving piece we have that gives us insight to Norse Mythology. The Prose Edda was compiled by Snorri Sturluson who was an Icelandic chieftain, scholar & historian. The Eddas give us information and glimpses of what spiritual beliefs and life were like for the ancient Scandinavian people.

It's important to note the Eddas were written many, many years after what is considered the "Viking" age - so the authors of these books were not pagans or polytheists. This means some of the thoughts in these texts have Christian influence. Mythological poems and stories are found in those books which you can buy copies of today as they have been translated and rewritten by various authors and scholars. Destiny and valor are common themes in Norse Mythology, which we will explore in more detail here.

The creation of life in Norse Mythology is a story that includes many different aspects. The cosmogony in Norse Mythology incorporates Yggdrasil and the Nine Worlds. Before there was any land or sea, there was Ginnungagap which consisted of the realms of fire & ice (Muspelheim & Niflheim). These two realms collided which resulted in the birth of Ymir. Ymir was the first giant, a frost ogre and original being of Norse Mythology. The descendants of Ymir are known as the jötunn. In most of mythology, you will find answers to questions like: how did we get here, why does the sun shine, where did the moon come from? What makes the oceans and the trees or even the mountains? Let's find out! 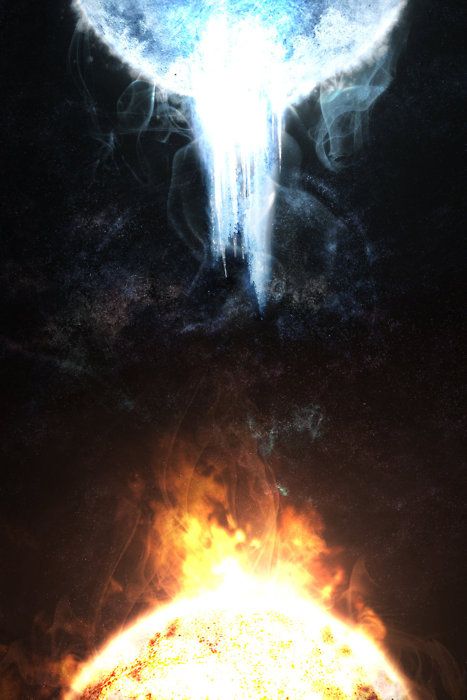 In the beginning of creation, Norse Mythology tells us there was a cow named Audhumla (Auðumbla), this cow came from melted ice and frost. The cow's milk became the river that fed Ymir. Audhumla ate from ice blocks surrounding her, and this was how she was nourished. The more she licked the blocks of ice, she ended up forming Buri from the ice. Buri was the first of the Æsir gods. The Æsir gods are the primary pantheon in Norse Mythology (there is also Vanir). Buri would go on to have a son named Bor. Bor fell in love with Bestla, who was the daughter of a giant. This resulted in their children being half god/half giant. The children whom Bestla gave birth to were Odin, Vili and Ve. Odin is a name mentioned often in Norse Mythology as he became the chief of the Æsir.

Odin and his brothers eventually would slay Ymir the frost giant. The legends tell us that Ymir's blood created the water in our oceans, seas and lakes. His flesh created our earth. His hair became the trees producing our forests and his bones became the mountains that stretched to the skies. His brains became the clouds. From Ymir's skull Odin, Vili & Ve made the sky. They placed the sky over the earth with its four sides. Under each corner they put a dwarf (who grew from the flesh of Ymir), whose names are East, West, North, and South.

It is interesting to note that with many situations out of death comes life. Before we move on, I'd like to mention Midgard was the name of the human realm. Ask and Embla were also the first two human people of Midgard, who were given life by Odin and his brothers. (There are variations of this myth specifically). It's said that Odin and the associate deities found tree trunks who were shaped like a man and a woman. The gods breathed life into them, and that is how the first two humans came to be. The gods gifted them with human features and abilities.

In each of the nine worlds, different stories take place throughout them. For  example in Svartalfheim, the home of the dark elves: Thor's Mjolnir was created. This is a land of magic and craftmanship afterall! Odin's spear, Freyr's magic ship were also created by the elves in Svartalfheim. Speaking of Thor & Freyr let's move on to some of the gods and goddesses in the Norse Pantheon.

Odin was a god of wisdom, wit, poetry war and magic. He was a traveler, a ruler of the Æsir tribe. He is associated with Sleipnir, the 8 legged horse, and also associated with Valkyries which are female warrior spirits. Famous stories of Odin include how he traded his own eye for knowledge at the Well of Urd. He has two wolves, Geri & Freki, two ravens Huginn & Munnin.

There are many more gods and goddesses to name but for now I will keep this as simple as I can. Thor, Frigg, Freyr, Loki, Freya, Baldr & Tyr are some common names you will hear in Norse Mythology. You can read more about them by clicking on their names. There were two main tribes of deities: Æsir and the Vanir, although you cannot forget the various spirits in the Norse beliefs as their are many. There was a great war that took place between these two groups of gods - Freya actually was burned three times in the process! (This is also known as the tale of Gullveig which many believe was actually Freya) The Aesir were masters of combat, and used weapons of great power and force. The Vanir were not as violent so they used other forms of combat, specifically magic. The battle went on for some time and both sides had their gains and losses. Finally the two groups of deities could fight no more, and decided on an armistice. As mentioned about the Vanir and their use of magic: Inside of Norse Myths you will hear about seiðr. Seiðr was a powerful form of pre-Christian Norse magic and shamanism that was related to prophesizing and shaping the future. Trances were used to engage with spirits, and seiðr was primarily practiced by women... and Odin! The Norns were masters of seiðr. The three Norns were named Urdr, Vernandi and Skuld.

Throughout the myths you will hear of wars, love, and even sometimes very funny stories.(Think of mighty Thor & the swindler Loki dressed up as women). The purpose of these myths were relevant to the times because, he people who lived during the time era in which these myths were originated could associate themselves with those stories. They could relate to the myths because in them, were tales of magic and lessons that could be applied to every day life.  Some popular stories in Norse Mythology include the Birth of Sleipnir, The Fortification of Asgard, The Mead of Poetry, Odin's Journey to the Well of Wisdom, the Death of Baldr, and the Binding of Fenrir. Norse Mythology also teaches the story of Ragnarök. Ragnarök is a series of events that would take place leading up to the end of the age of the gods. Myths of Ragnarök explain that a great battle would take place, Fimbulvetr (or fimbulvinter, 3 excessive winters), the gods would die and that were would be a number of natural disasters throughout the earth. It was said that after the end, and after Ragnarök, only two humans (Líf & Lífþrasir)  would survive and would then once again repopulate the earth. Ragnarök is significant to Norse mythology and it truly shows us how the Norse people had an understanding of their own world. Many believe that Ragnarök is also symbolic of a cycle. After all, in much of the Old Norse texts you will see that not everything is as it seems! Some things are not meant to be taken literally - a good reminder to never take life too seriously.

Below you will find a list of gods and goddesses and other characters mentioned throughout Norse Mythology: