How Brigid Found Me

First off, I should start off by telling a bit about my belief system. While I'm a semi-practicing (when I can get to the church) Roman Catholic, I am very much drawn to the Old Ways. Our child will understand that altars, candles, special dishes, colors, and such were in existence LONG before the Catholic Church came about. My Irish (among other things) father always told me, "Well, your ancestors were Druids, if you think about it."

Our child knows about the roots of Halloween and both meanings of Easter (that was a fun Catholic School project!). She knows priests aren't just reserved for Christian worship, and is trying desperately to get her pendulum to work. She can say the Hail Mary but understands oracle cards help us gain wisdom and advice from the Universe. She knows about saints and angels, but knows most of them have other roots.

With that being said:

A very close friend of mine began having problems in his life September 2019 which rapidly was made worse by a colleague who literally destroyed every aspect of it.

It was October 26, 2019, when I received a phone call from him telling me all about it. Because of an unproven statement made by this colleague, he was set to lose literally everything he had: house, child, dog and cat, work, everything. I listened to him recount all this with the most hollow, empty voice I had ever heard from a human. I had to keep looking at the caller ID to make sure it was really him. I kept asking him questions about myself only he would know the answer to. Sadly, he answered them correctly.

And then came the suicide plan.

He told me in great detail how he had thought about taking his rifle way back into the woods and simply, "making it look like a hunting accident"; all this coming from what used to be the most joyful, smiley, upbeat, optimistic person I've ever known. It's a voice that will haunt me probably until the day I die. Even if I am diagnosed with dementia or Alzheimer's, I will still remember the hollowness of that voice.

Halloween was just a few days away and I was trying so hard to pull myself from the despair I felt at not having heard from him since October 27th. It was a combined effort of his mother, brother, a mutual friend, a member of the State Police who knew him well, and myself to get him to keep himself safe. We used the thought of his daughter, the dog and cat, his job, his friends, even myself to get him to see he should not pull the trigger.

October 31 came and I was in a massive fog. There was no Deity that I even thought about reaching out to; Catholic or Pagan. I was numb; completely, utterly, numb. I couldn't think straight, couldn't eat, but still dragged myself to the hair salon to keep my appointment. I was gone from the house for about three and a half hours. I put on a happy face for the stylist. It was pouring rain all day and I started to have a feeling Halloween was going to be a washout. This didn't help the despair I was feeling. After the appointment was over, I went home to grab a quick snack before having to pick up my daughter from school.

When I pulled in, something on the outside of the porch steps caught my attention. All I could do was stare out the windshield at this little Brigid Cross made from Q-tips and purple yarn. 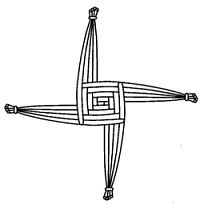 In the downpour, I got out of my car and picked it up with literally shaking hands; my freshly highlighted and styled hair just getting wrecked by the rain as I stared at this gift. Without getting into any background details, I put out a plea on Facebook for whoever left it to come forward so I could thank them properly for what they did. People even shared my public post among their friends of friends, but to this day (July 31, 2020) NO ONE has come forward.

Let me give you some background on this little blessing:

1. I'm an author, currently writing a series of novels, which have the same characters throughout each book. A series will typically keep continuing the characters' adventures until the series ends. The one I'm currently working on is set in the early 1700s and is about high seas piracy. The person I mentioned is one of the main characters, as am I. I made him an Irish pirate captain who hails from Dublin. The name of his ship is the Kildare; a name my friend chose. The post-Catholicism Brigid lived in the region of Kildare, Ireland. The Catholic Church set her feast day as February 1, which, in the Pagan belief system is Imbolc-the beginning of Spring, which rightfully belongs to the Goddess Brigid. (Remember, the Catholic Church converted many Pagan Gods and Goddesses to saints) Saint Brigid is said to have founded a monastery in Kildare, Ireland.

2. The purple yarn the cross was woven from: in my novels, the captain's love interest has a favorite color of purple. This is the color of her everyday work bandana, several gowns' accents, even the roses on her own pirate flag are purple. Since she takes over captaincy several times, he felt it necessary to give her her own flag so she's not sailing under his colors.

3. The timing of this was incredible. I was feeling so lost, almost drowning at what was happening to my friend. Halloween is revered as the time when our ancestors are able to come to us from behind the Veil and make their presence known. People often report experiencing scents associated with their deceased loved ones, objects are moved around the home, laughter can be heard when the house is supposedly silent. My friend knows Halloween is my favorite holiday/Sabbet.

4. Goddess Brigid, while attributed to many things, is mostly known for being a goddess of hearths and fires tended within them. Her cross, typically woven from rushes on February 1st, was hung in the home in hopes to protect the occupants and the structure itself from fires. This doesn't fit with any part of the Christian story of Saint Brigid, and so is likely a part of the older spiritual tradition behind the feast day. Here it should be noted that both my friend and I are firefighters, share Irish heritage, as well as these same Pagan-Catholic beliefs. 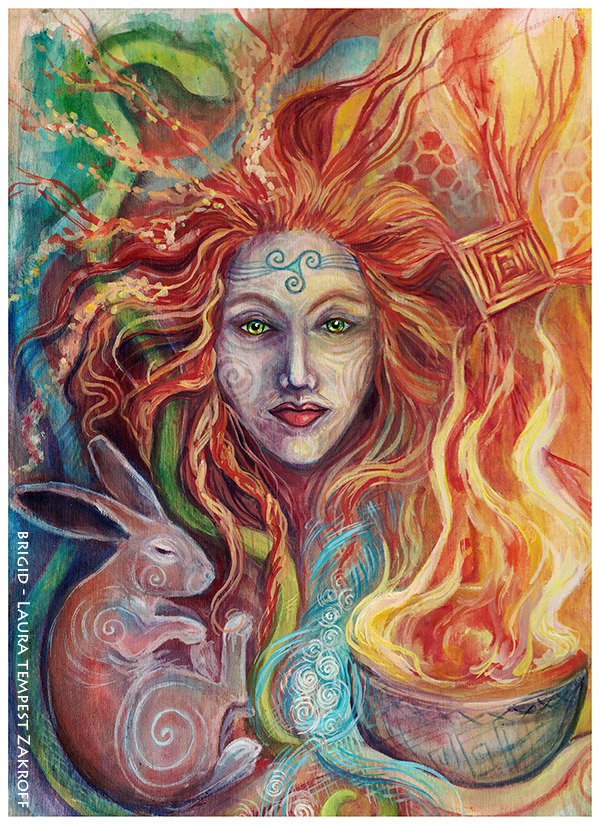 When my friend finally reached back out to me at the beginning of November, I asked him if he was the one who left me the cross and he said no. He had quietly been following the story on Facebook and was truly astounded at its sudden appearance in such an inconspicuous space on my porch, as well as the timing. He knew he should've called earlier to tell me he was okay, but his mind just couldn't bring himself to do so.

So, after his denial of leaving it, I put out another plea on Facebook to have the person come forward. No one laid claim to the deed. They all thought it was a true Halloween blessing/miracle. Again, I was so numb that I could barely reach out to any Diety for help or guidance on what to do, say, how to handle him or even myself. I guess I didn't need to. Brigid, herself, reached out and showed me she was here. I was not alone, and he would be okay. We both would be okay.

Ever since Halloween, that crudely made but absolutely beautiful blessing has been in my possession. I carry it in my work bag. Not only is she a Goddess of the hearth, she's a Goddess of healing. I'm an Emergency Medical Technician. My friend also works on an ambulance. Saint Brigid is also the patron saint of babies. Well, no matter how old our daughter gets, she will always be my baby. I have since been asking Brigid to look after her; especially in the middle of a pandemic.

The beginning of January 2020 is when he finally began to pull himself out of this pit of despair. I was relieved. Around that time, out of the blue, I had the strangest urge to search Etsy for a Brigid's Cross to wear. I found a beautiful one, which now hangs alongside my Saint Florian (patron saint of firefighters) medal, which I've had since joining my fire company in 2001.  Coincidentally, when my fire company was formed, it was formed solely for the Irish Catholics who wished to be firefighters. It's a comfort to have Brigid's cross with me, especially on the days when that awful sounding voice creeps back into my mind just out of the blue.

At the time of this writing, he still struggles with many things, but he feels less alone with certain people in his life. He was actually unfamiliar with Brigid until this whole ugly incident happened. He was left speechless, which is almost impossible to do, when he heard the whole story of "coincidences" and could only agree that the Old Ones still watch out for us, even in this modern world.

Signed with a pen name of,
Autumn Hallow

If you have a story you’d like to feature on our website please email us at info@mythsandbeyond.com