Greek Mythology! Greek mythology is one of the most famous of mythologies in the entire world. The reason for this is because Greek mythology really helps us to understand past civilizations and gives us historical insight of the ancient times.

Greek mythology and history were well recorded through art, monuments, statues, texts and ancient ruins. According to Greek mythology in the beginning, the world started out with three ancient beings: Chaos, Eros (love) and Gaia (Earth). Gaia was the creator of Uranus, and the heavens. Gaia and Uranus had children which were the original Titans of Greek mythology. The myths tell us that Uranus was not very fond of his own children and he hid them deep within the Earth out of spite. This was extremely upsetting to Gaia, and she was sad to see her children imprisoned in such a way, so she gave a giant sickle to her son Cronus (can be spelled Cronos or Kronos) which he would use in an attack against his father Uranus. Cronus defeated Uranus and this resulted in him releasing the rest of the Titans who were locked away within the depths of the Earth. Cronus went on to marry a Titan named Rhea, and from them the major gods were born. This was the start of the Olympians as we know them.

Following in his father’s footsteps, Cronus also locked away his own children (or ate them!) in the fear that the prophecy of his children taking his own powers would come true. The apple does not fall far from the tree when it comes to this story of Greek mythology. Rhea, the mother of Zeus, begged Gaia for help because she could not bear to see her children being imprisoned and eaten any longer. Gaia had once experienced the same situation and agreed to help Rhea. Zeus was hidden after his birth so that Cronus would not be able to kill him. Cronus knew of Zeus’s birth and Rhea tried to trick him by feeding him a stone instead of a child in order to spare the life of her son Zeus. The trick worked, and Gaia raised Zeus from infancy up until he was strong enough to be able to defeat his father. The prophecy would then become true as Zeus would be the King of all the Olympian gods. Once Zeus defeated Krono's, the war between the Gods and the Titans would take place.

Zeus, the god of the sky, weather, law and order, destiny and fate; He's usually depicted as a strong and handsome manly figure who is equipped with a lightning bolt, or a scepter. His companion animals were an eagle and bull, and Zeus is known for being extremely promiscuous and even worse...

Zeus is featured in many pieces of ancient Greek art work. Zeus had well over 20 children some of whom were: Apollo, Athena, Aphrodite, Dionysus, Helen of Troy, Ares, Hermes, Herakles and Persephone.

Zeus was the most powerful of all Olympians as he was the son of a Titan. He was known to be strong and he had quite a temper. The myths show us that Zeus would generally help gods and humans who needed help, but if he felt someone was unworthy he would unleash his wrath - usually in the form of lightning bolts. This powerful god of the sky is one of the most well known figures in all of mythology.

The war between the gods and the titans went on for 12 years until Zeus was able to free the Cyclopes. The cyclopes actually gifted Zeus his thunderbolt, Poseidon his trident, and Hades his hat of darkness. After the war the remaining Titans were thrown into Tartarus, which was one of the darkest parts of the Underworld and perhaps the most gruesome. Zeus, Poseidon and Hades decided to rule the Universe in three equal parts. Zeus would rule the sky, Poseidon would rule the sea, and Hades would rules the underworld. 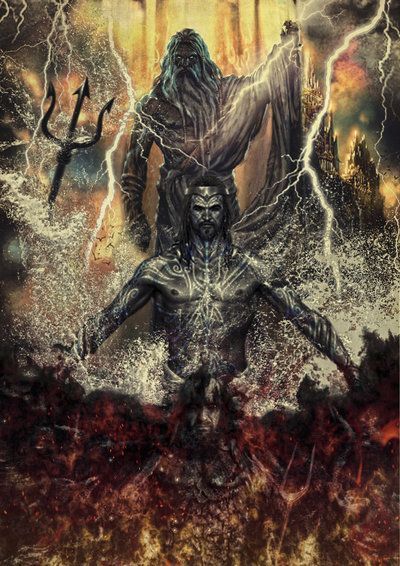 Zeus being the king would rule from his home of the immortals, Mount Olympus. Zeus was married to his sister, Hera but also was well known for having many affairs which produced many children.

Poseidon, god of the sea, was also god of the horses. Horses were very much a prize possession in many ancient societies. Sailors would call on to Poseidon and make sacrifices to him before leaving the shores, to ensure safe passage on their journeys. Poseidon was known to take those sacrifices very seriously just in the same way that he held his grudges seriously. King Minos would eventually learn this the hard way. King Minos was a previously ruler of Crete. Every year he would sacrifice his best bull to the king of the sea - Poseidon. One year King Minos decided not to give up his most worthy bull, and Poseidon punished him for it. Poseidon cursed King Minos' wife, and she became attracted to the bull, and fell in love with this bull. This is allegedly the story of how the Minotaur came into existence.

Hades, was a god and king of the spirits of the dead and the Underworld. Hades came from a family of chaos, darkness and the like. He was the guardian of the spirit realm and is also the god of riches and wealth according to Greek mythology. Hades was the oldest of child of Kronos and Rhea. He was an immortal god, and one of his most prized possessions was his Helm of Darkness that he wore upon his head. The Helm of Darkness was a helmet that granted the power of invisibility to its wearers. With Persephone as his wife, they were both also known to be gods of fertility. Hades had direct connections with Charon (a grim reaper of Greek Mythology) and Cerberus, the three headed dog who represents the three judges of the underworld and decide the fate. There were three parts to the Underworld: Elysium (paradise), Asphodel (neutral realm), or Tartarus (Tartarus contains criminals, titans, and people who upset the gods.)

Hera was a very important Queen of the gods and was also the sister and wife of Zeus. She was powerful and very respected in Greek society. She was the symbol of protection of women, childbirth and marriage. She was also a goddess of the sky and was able to predict the future. Hera did have a dark side which made her vengeful and spiteful. One of the most famous stories of her spite is with the story of Herakles. Zeus had a son, Herakles who was born outside of his marriage to Hera. Hera with all of her spite sent snakes to kill baby Herakles. What Hera did not foresee was the strength of this child, and he killed the snakes and crushed them with his bare hands even though he was a baby. Hera would never recover from this moment and eventually when Herakles was older she made him so insane that he actually killed his wife and children, which then resulted in him having to complete the 12 Labors of Herakles. 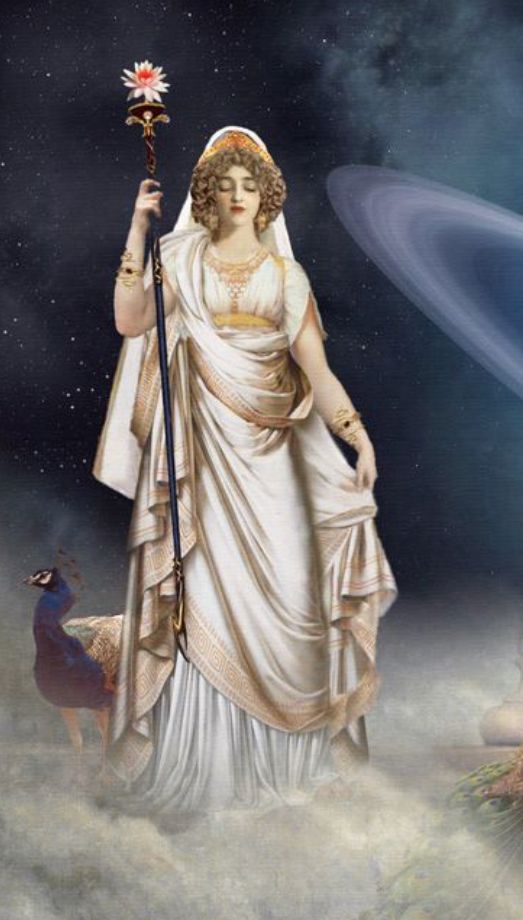 Another famous tale of Greek mythology is the tale of Athena's birth. Zeus had received knowledge of an omen from Gaia, that his lover Metis (yea, Zeus was pretty much a serial cheater - sorry Hera), would give birth to children who would overthrow him and take away his power. Once Zeus learned of the omen, he took Metis who was pregnant at the time and swallowed her whole. He did this in hopes that she would never be able to birth the children that would grow up to usurp him, thus the omen and prophecy would never be completed.

As time went on Zeus started to complain of terrible headaches. One day he could not take the pain anymore and he had Hephaestus, god of the forge, cut his head open to see what was going on inside. Once Zeus's head was cracked open, Athena dashed out in full armor and ready for battle and to take on the world. Athena had qualities of both her mother and father, she was full of wisdom, she was a fair goddess, and also a goddess of war, wisdom and crafts. Athens was named after the lovely and fierce goddess Athena. This only happened after a contest took place between Poseidon and Athena as they fought for the title of that city. Athens became dedicated to Athena because she was the one who gifted the ancient Greeks olive trees. 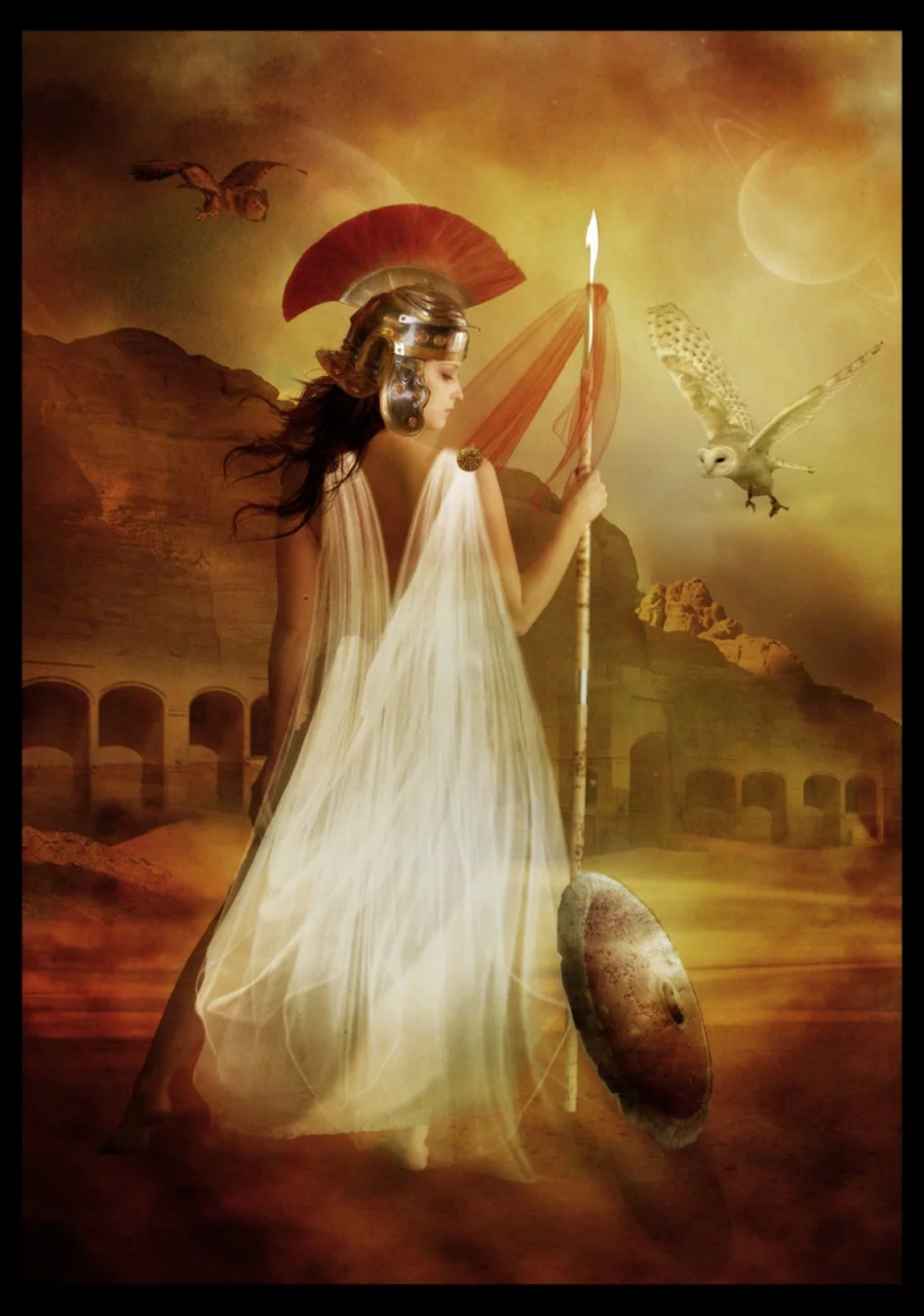 Within Greek mythology you will find gods of the elements, gods of war, goddesses of love, goddesses of farming & agriculture, fertility, gods of thieves and more! Each of these deities are important despite whether or not they are in the main pantheon of Olympian gods. Each of them represent different components of human nature, power struggles, parent and children relationships, stories of love, lust, greed and ever murder. The stories have been passed down for generations and it is truth that these influential gods, goddesses and creatures of mythology impact us even to this day and age.

Some famous stories in Greek Mythology include: Pandora's box, Clash of the Titans, Persephone Queen of the Underworld, Prometheus & The Theft of Fire, The Three Sisters of Fate, Theseus & the Minotaur, and Perseus & Medusa.

Here are more gods, goddesses or creatures in Greek Mythology that you may be interested in learning about: (Please note, the information on this section is always under construction and being updated daily)    Donations are always accepted to further the development of this site: Web Donations